What a weekend! Shirtsleeve weather almost as warm air from the South is delivered to us via the leading edge of a low pressure system. I recall that just two years ago this past week the Governor called off school due to the cold. How things change!

With so little snow cover, trails left by animals are very apparent and it is along these that I wander. My “guru” Aldo Leopold, writes of this time of year and his words seem prophetic. What do I find as I amble along the hillside above Wood Duck Pond but skunk tracks! Skunks walk on the flat of their feet, called plantigrade, and I wonder what brought him out of his slumber. 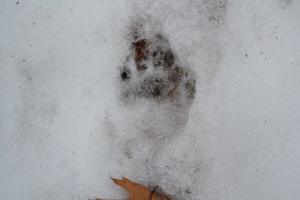 Not so fortunate was a rabbit, its becoming a meal for some raptor leaving only small tufts of fluffy fur. The snow cover is too crusty to let the marks of the primary wing feathers of an owl show, so I am left to merely speculate about the rabbit’s actual predator

Perhaps rather, it was a squirrel that became dinner for that raptor as nearby I come across a private squirrel solarium at the base of a Red Oak. In the warm spot created by the parabolically shaped exposed roots of the tree is a midden of chewed open acorns. It looks like someone’s been here often this winter. 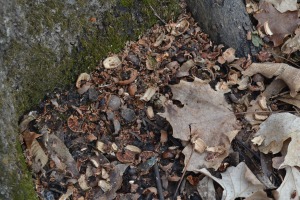 At the base of a Sugar Maple, right up the hill from the oak, there is no such pile of leavings. The bounty that maples provide, namely their sap, will start to flow in just a month’s time perhaps. Squirrels chew the ends of branches off then guzzle down the sap as it pours forth. It is a drink I myself relish: cold, as it comes from deep underground, pure, quite, as the fluid had to pass through quite the gauntlet of cell wall and Casparian strip transport mechanisms which filter out impurities, with just a hint of sweetness – a very refreshing drink indeed. I can’t wait. 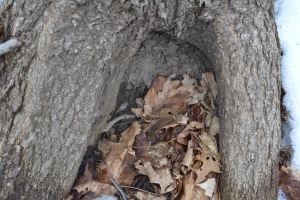